CenturyLink Receives Frost & Sullivan Award for Competitive Strategy Innovation and Leadership in the MPLS/IP-VPN Services Market
Company recognized as a leading provider of MPLS/IP-VPN services in the U.S. 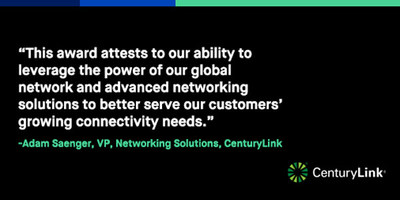 The well-known industry analyst firm recognized CenturyLink as a leading provider of MPLS/IP-VPN services in the U.S. market. "To achieve excellence in competitive strategy is never an easy task, but it is one made even more difficult considering today's competitive intensity, customer volatility, and economic uncertainty," wrote Frost & Sullivan analyst Roopa Honnachari in the award analysis. "Within this context, CenturyLink's receipt of this MPLS/IP-VPN services award signifies an even greater accomplishment."

CenturyLink has a strong Ethernet portfolio that, when combined with its MPLS footprint, positions the company favorably in the marketplace. CenturyLink's network capabilities include approximately 450,000 global route miles of fiber, with services in more than 60 countries and over 100,000 connected buildings, including connectivity to more than 2,200 public and private data centers across the globe.

"CenturyLink is honored to be recognized for innovation and leadership by industry expert Frost & Sullivan," said Adam Saenger, vice president, networking solutions, CenturyLink. "This award attests to our ability to leverage the power of our global network and advanced networking solutions to better serve our customers' growing connectivity needs."

MPLS service delivers global any-to-any connectivity in a secure, cost-effective, and cloud-friendly way that allows service providers to apply class of service (CoS) on the bandwidth. This has resulted in a high attach rate of voice over internet protocol (VoIP) and session initiation protocol (SIP) trunking services, along with MPLS/IP-VPN services. While the industry average attachment rate has been in the 50 to 55 percent range, CenturyLink reports an above-average rate of VoIP/SIP attachment with its MPLS at 85 percent.

CenturyLink's dynamic network management capabilities to create and scale MPLS, Ethernet, and internet connections and bandwidth on demand have also attracted increased interest in its complementary cloud networking offerings. It is this combination of private and public networking (hybrid networks) that allows customers to optimize network paths, reduce latency, and deliver better application performance and data privacy while moving workloads between public clouds and private data centers, or accessing these resources for business consumption.

"The emergence of SD-WAN has caused quite a ripple in the MPLS market," wrote Honnachari. SD-WAN is a critical component to customers' hybrid networking solutions, whereby the marriage of SD-WAN with the underlying network connectivity, commonly a combination of private networking (MPLS) and public networking (dedicated internet, broadband, or wireless), enhances business agility, supports customer growth, and adds a level of resiliency by leveraging multiple methods of connectivity.

CenturyLink offers managed SD-WAN services in more than 30 countries across North America, EMEA, and APAC, and is seeing increased demand for its MPLS services from new SD-WAN customers.