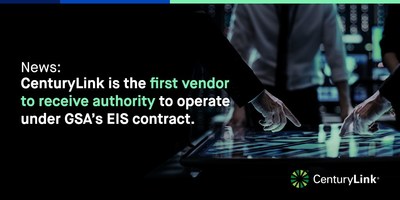 "We're excited to be the first vendor to receive an ATO on EIS so we can immediately help federal agencies jumpstart their IT modernization plans and use the latest technology to carry out their missions more efficiently," said David Young, CenturyLink senior vice president, strategic government.  "For example, agencies that have already issued EIS RFPs can now start awarding EIS task orders."

EIS is an indefinite-delivery, indefinite-quantity (IDIQ) program that serves as the follow-on to GSA's Networx, WITS3 and regional telecommunications services contracts.

GSA announced that it plans to extend the transition deadline from 2020 to 2023 to give federal agencies more time to successfully transition from legacy contracts like Networx to EIS.

CenturyLink is one of the few government contractors that offers agencies the choice to acquire IT services through its GSA IT Schedule 70, Networx Universal and Enterprise, WITS3, Connections II, EIS and Alliant 2 contracts.

By supplying cybersecurity, cloud, managed hosting and IT services over its modern carrier-class network, CenturyLink provides government agencies with the security and reliability they need to carry out their important missions.

Lumen Technologies is providing enterprise-grade servers at the edge of the network, enabling blockchain ecosystem Flux to launch new staking nodes and accelerate building Web 3.0, a decentralized, next generation...

Lumen Technologies (NYSE: LUMN) today announced that its Board of Directors voted to declare a regular quarterly cash dividend of $0.25 cents per share. The dividend is payable Friday June 10,...