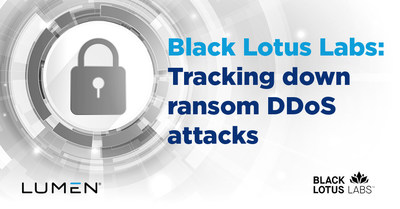 Since the second half of 2020, Black Lotus Labs has observed a disturbing number of entities receiving emails containing the threat of a sustained DDoS attack unless a Bitcoin ransom was paid. The team has observed RDDoS activity before, dating as far back as 2016, but the recent campaigns have been greater in number and duration. In addition, today's group of cybercriminals often perform a limited attack to prove their capability and malicious intent.

The case studies featured in the blog include RDDoS attacks from an unknown group claiming to be well-established entities including Fancy Bear, The Armada Collective, and Lazarus Group. The blog also dives into attacks from another group calling itself The Kadyrovtsy.

"The increase in RDDoS attacks in 2020 couldn't have come at a worse time," said Mike Benjamin, Lumen's head of Black Lotus Labs. "With so many businesses relying on their internet connectivity during the pandemic, these attacks had an even greater impact on their victims' operations."

Benjamin went on to explain his team's philosophy on paying ransoms. "We recommend never paying the ransom demand, as that only serves as fuel for this illicit business model, and there are no guarantees the criminals will actually stop the attack. The best defense is to utilize a DDoS mitigation service, along with deploying applications across a highly distributed infrastructure."

Lumen is guided by our belief that humanity is at its best when technology advances the way we live and work. With 450,000 route fiber miles serving customers in more than 60 countries, we deliver the fastest, most secure global platform for applications and data to help businesses, government and communities deliver amazing experiences.